I am fully furloughed and locked down. I can’t legally work for Loaf while receiving my 80% wage subsidy from the government, and I’ve put Photo School on hold until the Autumn at the earliest and offered all ticket holders a refund. I basically have nothing to do.

I could, of course, volunteer for stuff. I’m healthy and have a car. Or I could use this enforced isolation to do some of the art things I’ve been planning once I get some time, because time is all I have right now.

But I don’t because I’m exhausted. Tired all the time. I can’t think deeply about anything and my concentration is fucked. I feel like I’ve been through the mill even though I haven’t really done anything. It’s weird.

My lockdown didn’t exactly start smoothly. Getting Loaf’s online shop working in a week was the most intense I’ve worked on anything for a long time. And then Bunminster, our eight year old rabbit, had to be put down, which felt like a final straw. We’d been expecting it for a long time so it wasn’t a surprise but on top of everything else it hit me harder than I expected. 8am vet visits also fucked my already fragile sleeping pattern, resolving at fully nocturnal.

And then I had a revelation. Nothing I do at the moment matters. I can’t let anyone down because I’m not doing anything. No-one needs me. So I resolved not to beat myself up about my failures. If I sleep in when I was determined not to, that’s OK. If I can’t get the pressure washer to work, that’s OK.

This simple act of forgiveness, of letting myself off the hook, worked wonders, and within days I was on the verge of actually being useful again. My brain was still wading through sludge but I didn’t feel like a useless shit. And people who don’t feel like useless shits are much nicer to be around than people who do.

And then I started the jigsaw.

At the start of lockdown Fiona had ordered, on a whim, a 1000 piece Cold War Steve jigsaw puzzle featuring nice famous people on the beach (as opposed to his jigsaw of evil people in hell). We spent a few days working on it and it was a lot of fun.

In the obituary for Indian movie legend Irrfan Khan I found reference to his last English language film, Puzzle, co-staring Kelly Macdonald as a housewife whose life radically changes when she discovers she’s very good at jigsaws. We watched it as a laugh but it’s really good and introduced us to the concept of competitive team jigsawing.

Hearing of this new obsession, a friend lent Fiona another jigsaw, this one of sweets from the 1980s which we completed as a team in 90 minutes, because it was 500 pieces and really easy. I needed more so I started searching for jigsaw shops. I made two discoveries. 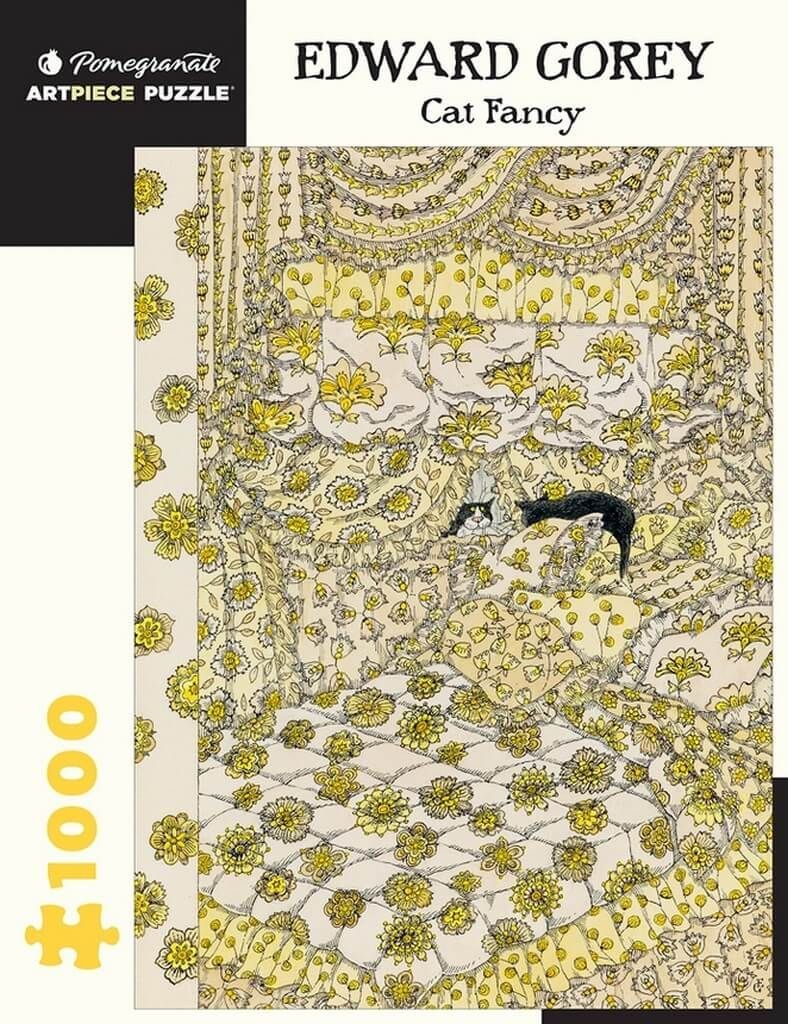 Eventually I found a jigsaw I could happily spent £15 plus postage on - an Edward Gorey illustration of a cat looking at another cat in an insanely over-furnished bedroom. I’ve always liked Edward Gorey’s work (if you’re not familiar, start here) and it certainly looked detailed enough (the Cold War Steve puzzle had far too much blue sky) so I placed an order.

It arrived a week later. In my nocturnal state I cleared the dining table and spent the night doing the edges, as task that took longer than usual because all the pieces in this jigsaw are basically the same. Fiona had a go the next day and pronounced it to be not up her alley in the slightest, so I carried on.

It should be a nightmare jigsaw, the worst kind. You can’t easily sort the pieces into more than three or four broad piles (I ended up with mostly white, flowers, leaves and scribbles). You have to take each piece, find its unique squiggle on the cover guide and then place it roughly where it belongs. Soon you find two pieces that fit together and then you’re off.

I should have set a timer but I think it took me 30 hours to do this jigsaw, mostly between the hours of midnight and 6am.

I started off listening to podcasts. Then music. And then I found myself working in the 4am silence, acutely aware of the humming of the lightbulb. One night I’d set the dishwasher going and totally tuned in to its cycle, the way it clunks and whirs over 110 minutes. All the while I’m picking up a piece, trying to find it on the cover and, if I do, placing it on the board.

While this was happening I found myself losing interest in the things that had been distracting me. I no longer binged on movies and box sets. I stopped doomscrolling the news sites. I barely opened my laptop. All that mattered was the jigsaw, one piece at a time.

Now it’s done I thought I’d feel empty, bereft of my task, but I feel cleansed. I don’t even think I need another jigsaw to do. This wasn’t an addiction or a habit. It was a winding down, a turning off of unnecessary and unhealthy functions through focussed attention.

I’ve never found calm through meditation, exercise or any of the recommended methods. Sure, I’ve probably never tried properly, but then I wasn’t trying to do jigsaws properly. I just fell into it. And it worked.

My Autistic Traits, diagnosed a couple of years ago, are a funny thing to properly understand. I don’t have medical Autism, which is how the NHS decides whether they are the right agency to help you. And I don’t think I have learning difficulties, and even if I did I’d have to be in education to get support. I’m certainly the definition of “high functioning”. But my psychology, my personality, has certain traits. Usually they are passive or at best quirky. They mean I’m an artist and explain my interest in philosophy. I think in a certain way that defines me, and that’s groovy.

But occasionally they get fed too much of the wrong thing and they loom up and take over my brain. My behaviour changes in subtle ways and often only I can tell something amiss. I expect to be functioning in the usual way but suddenly I can’t, and that leads to anxiety and depression. For a long time I thought I was simply suffering from depression, but I’ve come to realise it’s a symptom of this conflab in my brain. This confusion with myself.

These days, thanks to the Autistic Traits diagnosis and the love of a good woman, I’ve started to be able to spot when the traits kick in. They can be a good thing, helping me to see the wood for the trees or to focus through the noise and see what’s going on. (I actually thought Boris Johnson’s speech last Sunday made sense on first viewing because I automatically edited out all the nonsense. It was only on watching it again that I realised how confusing it was to everyone else.)

But they can also be a hindrance. I think my state during the first weeks of lockdown is a case in point. I’m usually pretty good at figuring out what’s going on in the world. After the Brexit vote most of my friends and colleagues were in shock, but I quickly developed a good-enough understanding of what had happened and why. I remember driving my mother, on a trip from New Zealand, and her German friend into town and explaining what had happened in a detailed way that even surprised myself. I wouldn’t necessarily stand by that assessment as much more came to light over time, but it was a good working model.

The Coronavirus has been the opposite. Facts have emerged slowly. The future is not just uncertain, it is practically unknowable. When thinking beyond the next few weeks there is nothing firm to hold on to. I know and accept all this, but my traits find it very hard. I need to build a model, to understand. The immediate political circus is a welcome, if depressing, distraction, but it doesn’t salve the ache my brain has for a model. I don’t need to know exactly what will happen. I just need a framework to hang things on and file them away. Then I can get on with my life.

I’m sure I’m not alone in this. I think we’re all discovering brain traits we didn’t know we had, or didn’t realise could be problematic. It’s a horrible time to be mentally fragile.

The title of this post started as a joke, a play on words, but there’s a chunk of truth in there. I don’t quite know what I’d have done without that jigsaw. 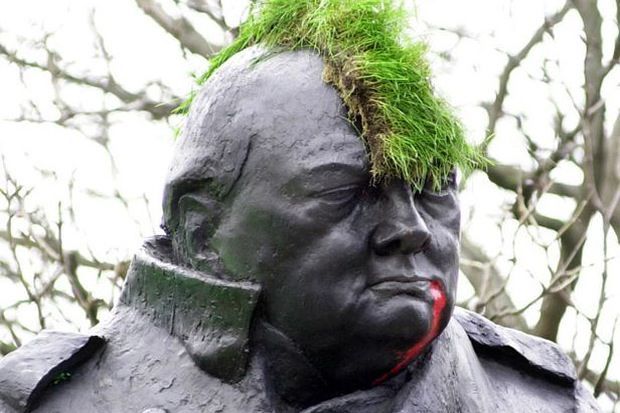 History is constantly being “erased”, and that’s OK.
Latest posts Update your Feed Reader! This blog has been mothballed. Revising the 1972 Project Starmer has effectively introduced a Twitter policy We desperately need social media literacy or the fascists will win History is constantly being “erased”, and that’s OK. Last week a jigsaw saved my life Lost in Bluster Insomnia Journal 07 May 20 Stirchley Safari Whales on the Hudson Closing the Covid browser tabs Solving (a bit of) the Coronavirus from home Stopping A proposal to support independent businesses that cannot survive social distancing A modest proposal for slowing down cars Cross City Walks - the movie Good composition is ideologically fraught Short Reviews of Films Understanding Gilliam, and other men of a certain age Grace Lee’s talk: Diary, Discourse and Demonetisation Star Wars is Over (in a good way) Election notes How to read articles on websites that don’t want you to read their articles Uranium Club RIP Tom Spurgeon Introducing Notes, my new microblog Lindelof’s Watchmen, and the creative employment of corporate IP Eisenhower and the Hippies The Widelux, as used by Jeff Bridges Media with Edges Art-trip to Liverpool